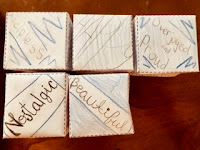 [Health Block assignment. Pick 5 songs that correspond with 5 different emotions. Write about each emotion on each side of the paper cube. Assemble the cube and shoot a Tik-Tok video of each panel of the cube using the corresponding song.]

Helpless
Song: Help by The Beatles


Last summer, the majority of my friends moved away. Three of them were my neighbors. At the time, I felt helpless and almost depressed. I had no one to hang out with.

I ended up staying in my room on my phone and not even spending much time with my family. My mom is a neuropsychologist and helped me get out of my slump.

We have always listened to The Beatles since I was a baby. At this time, we really bonded over the music. In the song, John Lennon was crying for help and I needed it too.


Happy
Song: King of the Clouds by Panic! At the Disco


At the beginning of the year, I found out there was a Panic! concert in Charlottesville. It was a weekend so Catherine and I begged our parents to go.

We were such big fans and always listened to his music when we hung out together. One of the songs that played was King of the Clouds.

Jessica P was my neighbor and the first person I met when I moved here. She recently moved away.

When we use to play on snow days, we got too cold and would go to her house to play Just Dance 4 to warm up. We almost always did the Ghostbusters theme song.

I remember Jess and I wanted to be Slimer but her younger brother wouldn't let us because we couldn't fly like him. I've played Just Dance with her more times than I can remember and everytime was the most fun time I ever had.

Beautiful
Song: Scars to you your beautiful by Alessia Cara

I feel that the world we live in today is very negative.

In the song, Alessia talks about how everyone is perfect, but they end up comparing themselves to others and want to change.

Her statement really spoke to me because many people, myself included, have insecurities and deserve to hear her message and love themselves. I am now more confident about my image.

Overjoyed and Proud
Victorious by Panic! at the Disco

In the summer of 2019, I went to the National Taekwondo Championships. Even though I had been there before, I was more stressed than ever. Instead of competing in one division, I was competing in three.

I was also competing in the hardest age group. My teammates were in a division with me where we do a routine together. The three of us weren't expecting anything since it was our first year.

In the end I ended up third in the country by a fraction of a point. I have never been more overjoyed than I was in that moment.
Posted by J A Y @ C I A at 3:56 PM No comments: