Baby you can drive my car

When my mom tells the story of my birth there are several details that never change. There was bad and icy winter weather. There was a taxi cab ride in that weather. And finally, I was in a rush to be born. Perhaps it was because I was the last and youngest of 4 children to be born. Or perhaps, it is an indication of the type of person I would be. I leave that up to you to decide.

The picture here is one of your imaginative creations put together in "the old house" at Warwick. It's a car that you built using old boxes and some arts and craft supplies. You used paper plates for wheels so they were already round. But you wanted to cut them into shape any way. In the back seat, I can make out the heads of at least two of your baby dolls.

Because of where we lived, as you may recall, you basically traveled everywhere by car from a very early age. For myself, we never really made use of baby seats (or seat belts for that matter) growing up. It's just the way things were back then. I remember wearing seat belts became mandatory for front seat passengers around the time that I got my driving license.

Can you still remember the Warwick house and the long walk to the parking lot. We had two parking spaces that were not near each other. One was near Mr. Scott's "grabber orange" Mustang and Brad and Karen's Scion cube. We parked Goldar there usually. The eggplant purple "Hondo" was parked further down the sidewalk next to Mr. Scott's white pick up truck.

Do you remember your daily trips to MCHL? We would go out of our parking lot neighborhood to the traffic light on Sterling Blvd. Cross over the bike path and turn right at the light where the Domino's pizza and gas station were. We would pass where Rebounderz was and the warehouse buildings where you used to ride your bike with training wheels. We would drive down Davis where all the trees changed colors in the fall...but now many of the trees were cut down to make room for an ICE detention center.

We would pass Joe's Cafe. We would also pass the Sterling Cemetery where your brother, Joshua, is buried. And your school would be at the next light, near the 7-11 and King's Buffet, the Filipino store (which isn't there any more) and so much more.

Your school was at the intersection of Cascades Parkway and Church. We used to take Church over Route 7 to go to Wegmans. Now we take Cascades Parkway to get back to where we live on Algonkian, or to go to Home Depot or Majest from Sterling Park.

Any way, this picture was part of a portfolio your mom put together to get you into FUTURA at Algonkian Elementary. She wrote about how you were a kinetic learner who worked best by being hands-on. She talked about how you are also a social learner who works well in groups and also is attentive to receiving directions and getting positive feedback from your teachers. I think that's why Tae kwon do appeals to you so much in a way that piano lessons did not.

Enjoying music as a player is a hard thing to do. It's partly group, but a lot of individual practice. For some, it is like athletics. And in the end, one loves and takes to things for whatever reason. I often tell people the violin was my first love. It was definitely the first instrument I had formal music lessons. I know that I took to the mechanics of it and could easily play things by ear. I know that I enjoyed being in orchestra later in life and definitely enjoyed playing chamber music in Spring Lake or at music camp. (I'm even on 2 records).

But I am nowhere near as proficient as I was back then. Lack of practice and passage of time. Instead, I've become much more of a piano player (and some guitar). But none of that really happened until the last handful of years. I am sure I'll talk about music more in other posts. For now, I just wanted you to know, in the same way that you will one day drive my car, I hope you know that whatever I can offer you musically (or that you can make use of when I'm not), it's yours.

As a writer, I often listen to conversations in a room and think about how I could script them better. As a musician, I think it's where my creative energies go when I don't want to have to talk, but I still want to register that "I am here" and "I'm doing something that matters in the moment." It's my way of doing my part. And, as I am sure you recall me telling you, it meant that as long as I was playing, I was off the hook until it was time to eat.

March For Our Lives 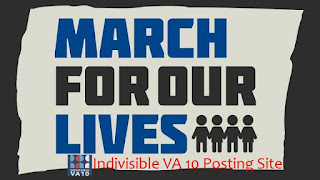 I am glad that you were able to go to the Newseum for your 8th Grade class trip. Although I didn't tag along on this trip like a did for the Harper's Ferry trip, I am glad that our family was able to go at least once together.

It's unfortunate that the Newseum will close at this DC location at the end of this year. When I asked you what I should see before it closes, you mentioned that there was a newspaper headline that talked about the March For Our Lives.
I am sure that you remember we went to this historic, though somber, event back in 2018. I am sure you remember the large crowds and you probably also remember that we stood right outside the Newseum for most of the day. I hope you also remember what happened as we went to leave.

Next to the Newseum is the Canadian Embassy. Outside it several volunteers had set up places where kids and youth could sit. There were some activities and crafts for them to work on having to do with gun violence and school safety. Many national and international cameras were set up with reporters to talk to students because this never-ending blight of school shootings continues to be something I never had to deal with, but that your generation is growing up with. It isn't normal. And like addressing climate change, it is a deep lack of moral leadership and indifference of older generations that is letting this persist.

In any case, I hope you remember the woman volunteer who asked us if she could speak to you. She knelt down and she held you and spoke very clearly and directly to you. I wrote about it here at this link if you want to scroll to the end of that article and read exactly what she said so you can remember.

Here is the speech that Emma Gonzalez gave. It went viral and I used it at one of my parent confirmation meetings to talk to the parents about choosing a Confirmation/Saint Name. I said it should be like a #hashtag. It should stand for something that goes viral.

I appreciate what you share with me of your social media life. I'm glad that most of what you watch and participate in on your channels is entertaining and fun. I'm glad for the most part that you and I are safe and live in a world where law enforcement does its job well. But we've also seen how easily violence, especially gun violence upsets that. And that isn't something that happens far away to other people unlike us.

With the various local, state, and national elections you've seen mom and I work on, we've helped elect more officials who want to do something about gun violence. We don't believe the solution is putting more guns out there. We want you to grow up in safety. And we want you to also remember that you have a voice and you matter. However it is that you choose to work for the common good, never forget that.
Posted by J A Y @ C I A at 9:48 AM No comments:

Email ThisBlogThis!Share to TwitterShare to FacebookShare to Pinterest
Labels: Emma, Indivisible, March For Our Lives, Newseum

Cat's in the Cradle

I grew up hearing this song from Harry Chapin. The lyrics are easy to understand. The songs begins with the birth of the musician's son. As the song progresses, the son grows up wanting to be like his dad, but his dad never has enough time to spend with his son, until eventually the son also grows up and doesn't have enough time to be with his father. (Isn't it ironic?)


That's sort of the idea behind this Blog. Blogs are already as ill-worn as this scratchy sounding song that I probably heard on a record player or possibly the radio. There was no YouTube back then and I never saw Harry Chapin in concert, but many from my generation (and their parents) did and would remember this song.


In simple terms, this blog is an extended version of this idea. It's an opportunity to capture the conversations we didn't have, or didn't have enough time to finish, or didn't have in as ideal way. Time is always rushing by. Plus, as time passes, one thinks about those conversations and probably wishes more or less was said. Or maybe we just try to remember what those times were. Blogs are good for that in a way that our everyday memory may not be.

A lot of folks my age (and their parents) are thinking about their memories and writing their memoirs. So this may be a place where some of those people also pass through. They might add their thoughts and memories in the comments and we'll keep this conversation going.

I hope this website ends up being a place that you can go to for many years to come. A place where perhaps you and your relatives and friends can also share your comments and experiences. So we can have the kind of conversations and lasting memories that seem to slip by in the day to day when one goes off to work, or school, or whatever.
Posted by J A Y @ C I A at 7:41 AM No comments: